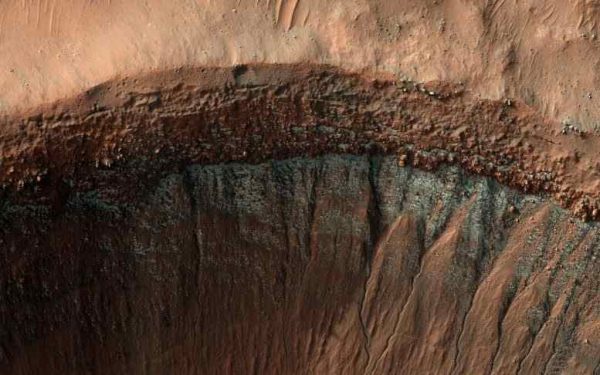 Ice is common in our solar system. They range from sediments at the poles of Mercury and the Moon, to the ice-covered moons and rings around distant Jupiter and Saturn, to comets made of ice and other matter flowing through the ice and the gaps in between. And, of course, ice exists in our own world.

Scientists study the ice of Earth and other planets. Snow and glaciers are the most important sources of fresh water for many parts of the planet, and ice deposits could provide water for future explorers of the solar system. Given that all living things need water, the existence of frozen water may even provide clues to the potential for life.

Each winter, carbon dioxide (dry ice) forms frost on the surface of Mars. This frost spreads from the poles to the mid-latitudes at its maximum in the middle of winter, becoming too warm and sunny to last. For most regions, this is about 50 degrees latitude on Earth, south of Canada’s latitude.

However, small patches of dry ice occur on poleward slopes closer to the equator and are colder because they receive less sunlight. A picture was taken in midwinter in the southern hemisphere of Mars and shows the crater at about 37 degrees S latitude.

The southern slopes are covered and reinforced with a mottled bright hoar frost blue. This frost occurs on the slopes and many valleys around them, causing rapids in the valleys in other images.

Early Martian climates were warmer and wetter than they are today. Its atmosphere was thicker and water flowed over the surface. Mars may have had oceans.

Today’s atmosphere is made up of 95% carbon dioxide, 3% nitrogen, and small amounts of other gases including water, oxygen and methane.

Why Is Mars Cold?

Where Did The Martian Water Go?

Due to the low atmospheric pressure, liquid water on the surface of Mars evaporates into water vapor.

So what happened to all that water on the surface of Mars? Some have actually evaporated into space. But much is frozen under the surface and in the polar ice caps.

Mars has ice caps at both poles. The Arctic ice cap is about 1,000 kilometers wide, roughly the width of Montana. The Southern Ice Cap is about one-third of its size.

As on Earth, Mars’ climate has changed over geological time, sometimes warmer and sometimes colder. During colder times, the ice caps expand and glaciers spread further across the Martian landscape.

1 thought on “In Winters, Mars Surface Is As Cold As Dry Ice (Carbon Dioxide)”