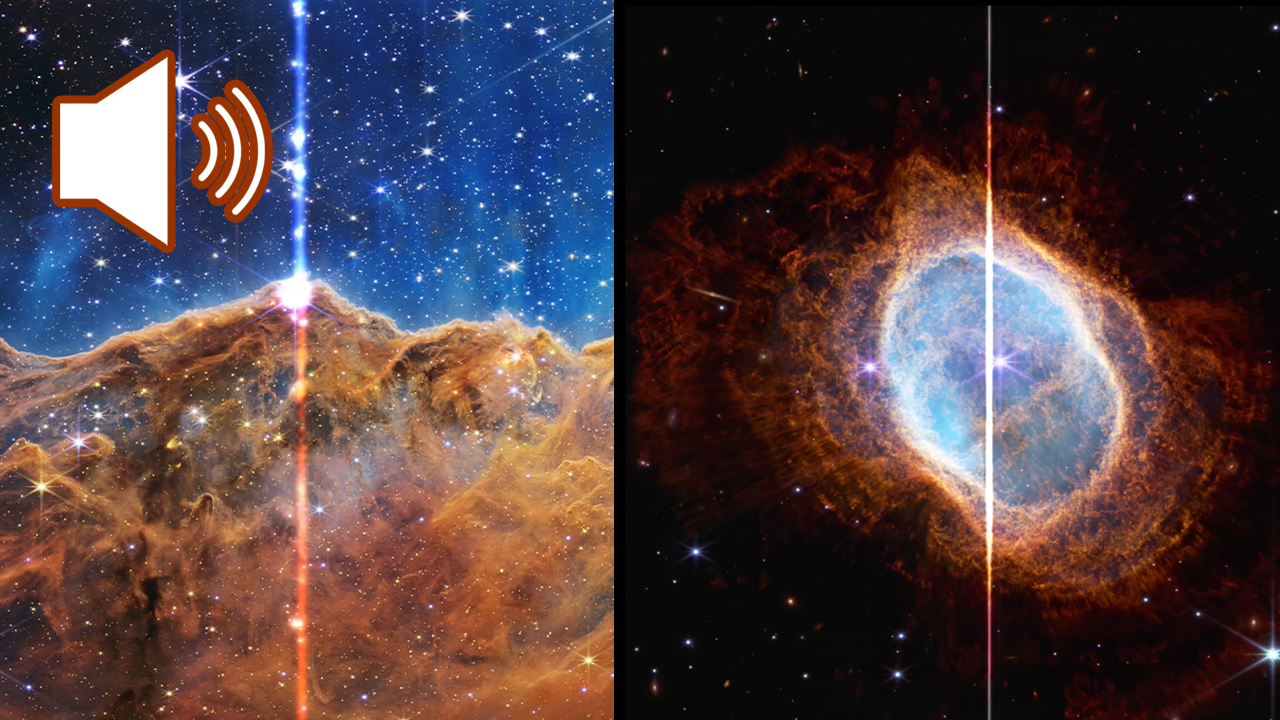 Some of the first full-color infrared photos and data from NASA’s James Webb Space Telescope may now be experienced in a novel, immersive way through sound. The Cosmic Cliffs in the Carina Nebula, the Southern Ring Nebula’s various tones, and the individual data points in the transmission spectrum of the hot gas giant exoplanet WASP-96 b can all be explored by listeners.

A musician and physics professor at the University of Toronto, Matt Russo, claimed that music “taps into our emotional regions.” Our intention is to use music to assist listeners form their own mental representations in order to interpret Webb’s data and imagery.

Webb’s composition was modified by a group of scientists, musicians, and a member of the blind and visually handicapped society.

NASA’s Webb Telescope’s near-infrared image of the Cosmic Cliffs in the Carina Nebula has been converted into a musical composition. The semi-transparent, gauzy parts and extremely dense regions of gas and dust in the nebula were each given a specific note by the musicians, resulting in a buzzing soundscape.

The image is scanned by the sonification from left to right. The music is loud and rich, capturing every nuance of this enormous, gaseous void that resembles a mountain range.

Blue hues and windy, drone-like sounds depict the gas and dust in the top part of the image. The composition is clearer and more melodic in the bottom half of the image, which is depicted in flaming orange and red tones.

Both of the two images of the Southern Ring Nebula obtained by NASA’s Webb Telescope in near-infrared light (at left) and mid-infrared light (at right) have been converted to audio.
In this sonification, the colors in the photos were changed directly from light frequencies to sound frequencies by mapping them to pitches of sound.

A higher range of frequencies at the start of the track correspond to near-infrared light. To reflect the fact that mid-infrared comprises longer wavelengths of light, the notes alter halfway through and become overall lower.

At 15 and 44 seconds, pay close attention. The centers of the near- and mid-infrared images, where the stars in the heart of the “activity” appear, coincide with these comments. Only one star is audible clearly and with a louder clang in the near-infrared image that opens the track.

From left to right, the sonification traverses the spectrum. The y-axis is scaled from bottom to top according to how much light is blocked. The x-axis has a range of 0.6 microns to 2.8 microns on the left and right, respectively. Each data point has a pitch that matches the frequency of light it represents.

Lower frequencies and lower pitches are produced by longer light wavelengths. Each data point’s volume corresponds to the amount of light that was measured there.

The sound of falling water droplets stands in for each of the four water characteristics. Since water is detected as a signature with numerous data points, these noises help to simplify the data. Only the highest locations in the data are aligned with the sounds.

These audio tracks are made with blind and low-vision listeners in mind, but they are also intended to be interesting to everyone

“This is analogous to how written descriptions are distinct translations of visual images. Our teams are devoted to ensuring that everyone can access astronomy. This project is similar to the “curb-cut effect,” a requirement for accessibility that accommodates a variety of pedestrians.

According to Kimberly Arcand, a visualization scientist at the Chandra X-ray Center in Cambridge, Massachusetts, who oversaw the initial data sonification project for NASA and is currently working on it for NASA’s Universe of Learning, “When curbs are cut, they benefit people who use wheelchairs first, but also people who walk with a cane and parents pushing strollers.”

“We hope an equally large audience will see these sonifications,” According to preliminary survey findings led by Arcand, both sighted and blind respondents claimed to have gained knowledge about cosmic imagery by listening.

These songs do not contain real space recordings of sounds. Instead, Russo and his musical partner Andrew Santaguida meticulously composed music to precisely portray the details they wanted listeners to pay attention to when they mapped Webb’s data to sound.

These sonifications, which transform Webb’s visuals and data into a new medium to engage and inspire listeners, can be compared to modern dance or abstract painting.

Christine Malec, a supporter of this initiative and a member of the blind and low vision community, claimed to perceive the audio tracks with a variety of senses. “A sonification impacted me when I first heard it in a visceral, emotional sense that I assume sighted people experience when they look up at the night sky,” the author once said.

These changes also offer additional noteworthy advantages. Malec stated, “I want to grasp every subtlety of sound and every instrument selection because this is essentially how I’m feeling the image or data.

Overall, the team expects that sonifications of Webb’s data will encourage everyone to follow the observatory’s impending astronomical discoveries and give more listeners a stronger sense of their place in the universe.