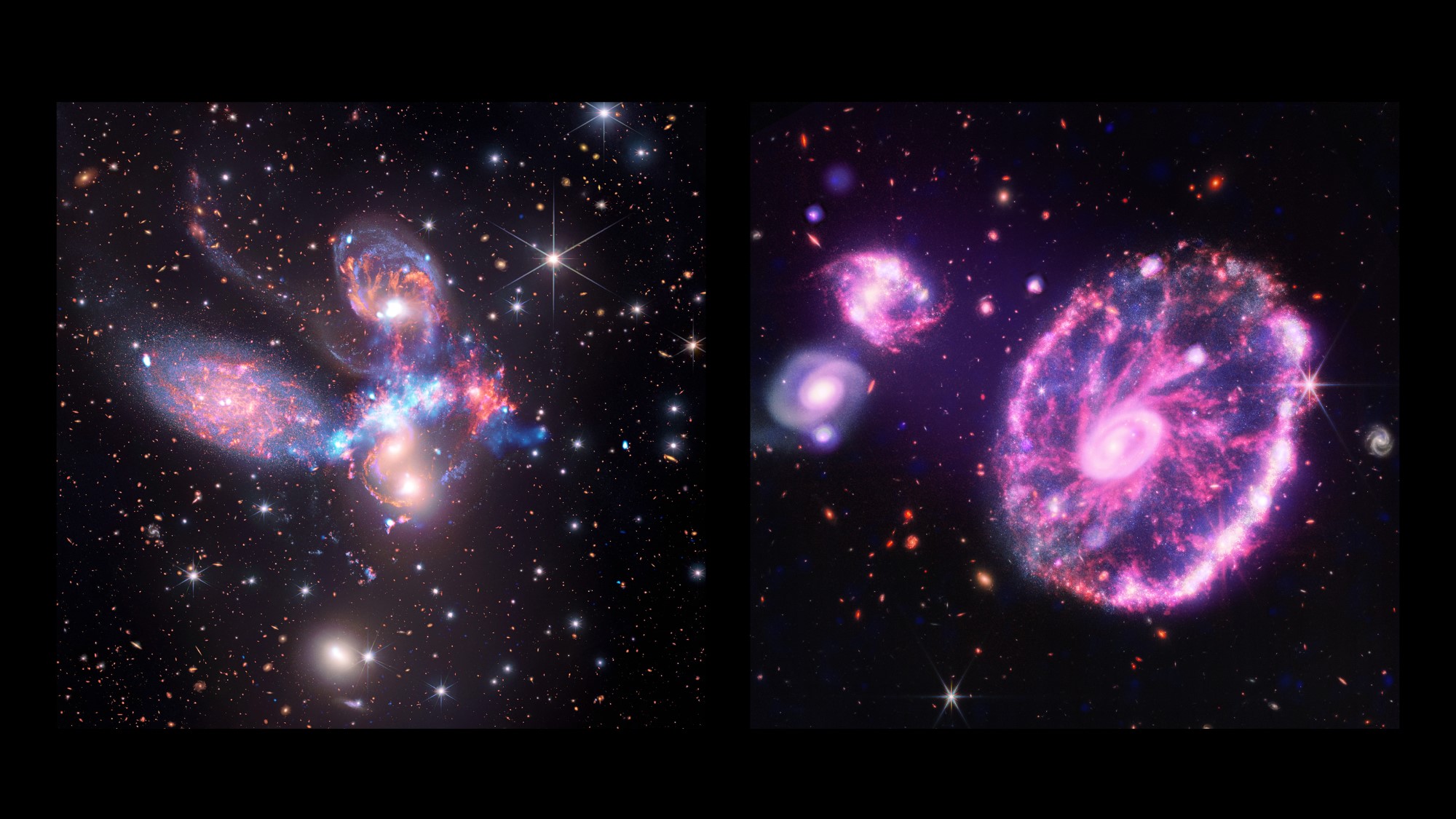 Combinations with The Instruments

In fact, it might work best in combination with other instruments. JWST is built to view the universe in infrared, therefore its work is especially beneficial when paired with tools that view space in various light spectrums, like Chandra’s X-ray vision. According to a NASA report, the first photos upgraded with Chandra X-ray data show new features that JWST alone couldn’t see.

Think about the scene in Stephan’s Quintet, where four galaxies are entangled in a challenging gravitational dance while a fifth galaxy is watching from a distance.

These galaxies’ JWST image revealed characteristics that astronomers had never before observed, especially the results of their interactions like gas tails and bursts of vigorous star creation.

The studies of Stephan’s Quintet showed a previously unknown shock wave heating gas to tens of millions of degrees on any scale when paired with information from Chandra and NASA’s decommissioned Spitzer Space Telescope.

What Causes The Shock Wave?

One of the galaxies causes this shock wave by slicing through the others at about 2 million mph (3 million kph). The far-off Cartwheel galaxy, another object that the JWST observed, similarly depends on cosmic collisions.

When this galaxy and a smaller galaxy collided 100 million years ago, it gave rise to its distinctive shape. A period of intensive star production began as the smaller galaxy tore through the center of the Cartwheel galaxy.

The Data about Neutrons

Data from Chandra show that superheated gas, individual burst stars, neutron stars, and black holes that are voraciously consuming companion star matter are all responsible for the X-ray emission in the Cartwheel galaxy.

The galaxy cluster SMACS J0723, which is 4.2 billion light-years away from Earth, was captured in one of JWST’s initial photographs, which was possibly the most brilliant. Gas heated to tens of millions of degrees Celsius is revealed by Chandra’s supplement to these observations.

That is multiple times the combined mass of all the stars in the cluster.
(However, there is still plenty to be seen.) Dark matter makes up more mass in this cluster than gas, but because it does not interact with light, it is invisible even to the combined power of the JWST and Chandra.)

The Cosmic Cliffs Of Carina Nebula

The Cosmic Cliffs of the Carina Nebula near the edge of the star-forming area of NGC 3324, undoubtedly the most magnificent image in the initial collection of JWST photographs, completes the quartet of new images.

The Chandra image of these cliffs, which are around 7,600 light-years away from Earth, displays more than a dozen X-ray sources, the vast majority of which are stars.

These stars are between one and two million years old, which makes them quite young in cosmic terms.

Young stars like this one emit more X-rays than their older counterparts. Chandra’s data is especially useful in distinguishing young stars in the Carina Nebula from older Milky Way stars that may be lurking in JWST’s field of sight.

A diffuse X-ray emission from the region’s most massive and hottest stars, which are just outside the image’s field of view, can also be seen in the top half of the Chandra-enhanced image of the Carina Nebula.

JWST will collaborate with other space-based instruments like Chandra, as well as telescopes on Earth, during its operating lifetime, which is expected to be five years but could be more like twenty. The new photographs demonstrate how crucial these cooperation will be to astronomy in the coming years.