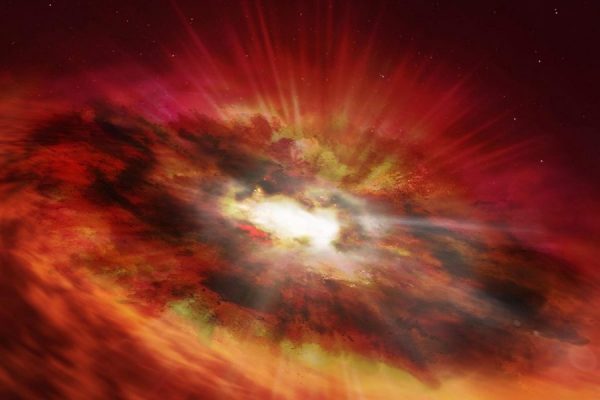 An international effort led by astrophysicists from the Niels Bohr Institute, the University of Copenhagen and the Danish Institute of Technology has identified distant objects with properties that lie between galaxies and so-called quasars.

This object can be viewed as the ancestor of a supermassive black hole, which was created shortly after the Big Bang. Modeling has shown that such an object exists, but this is the first real discovery.

This discovery can be attributed to the Hubble Space Telescope, jointly operated by ESA and NASA. Unaffected by weather changes, pollution, etc. Due to their position in space, telescopes can see deeper into space than is possible on Earth. And looking further in astronomy means observing phenomena that occurred during the early cosmic period because light and other forms of radiation traveled longer to us.

What Was The Discovery?

Discovery involves a special type of quasar. Quasars, also known as quasi-stellar objects, are very bright objects. Images from Hubble and other advanced telescopes show that quasars occur at the center of galaxies.

GNz7q’s host galaxy is a star forming galaxy that produces stars at a rate 1600 times faster than our own Milky Way. The stars in turn create and heat up cosmic dust, glowing in infrared light enough to cause the GNz7q carrier to emit more dust than any other known object during this Cosmic Dawn period.

In recent years, it has become clear that luminescent quasars are driven by supermassive black holes with millions to billions of solar masses and are surrounded by huge amounts of gas.

When gas falls into a black hole, it is heated by friction, providing a huge lighting effect.

Observation For The Characteristics Of The Black Hole

“Understanding how supermassive black holes formed and grew in the early universe has become a big puzzle. Theorists predicted that the black hole was going through an early stage of rapid growth.

A dense, reddish dusty object emerges from a dust-obscured stellar explosion galaxy, and then turns into an unobscured, glowing dense object, emitting gas and dust around it.” Associate Professor Gabriel Brammer from Niels Bohr Institute, said:

“Glowing quasars have already been detected in the earliest epochs of the universe, but transitions in the rapid growth of black holes and their star-forming hosts have not been detected in similar epochs.

Moreover, the observed properties are very consistent with theoretical simulations and suggest that GNz7q is the first example of a transitional phase of rapid black hole growth in the dusty core of a star that is the ancestor of a late supermassive black hole.”

Seiji Fujimoto and Gabriel Brammer are part of the Center for Cosmic Dawn (DAWN), a collaboration between the Niels Bohr Institute and DTU Space.

What Is Unique About GNz7q?

Interestingly, GNz7q was found at the center of a hard-studied sky field known as the Northern Hubble GOODS field.
Gabriel Brammer says, “This shows how often great discoveries are hidden before your eyes.”

Finding the hidden GNz7q was made possible thanks to a unique detailed multi-wavelength data set available from GOODS North. Without much data, this object is easy to miss as it lacks quasar features.

Significance Of These Discoveries

These objects are completely erased and much more detailed and the probing of basic physical physics is available using the James Webb telescope. In the common task of Webb, these black holes are often able to see how commonly they occur.

“With the help of the James Webb telescope, a full characterization of this object and a more detailed study of its evolution and fundamental physics will be possible. Once it starts working normally, Webb will be able to determine for sure how widespread this fast-growing black hole is,” concluded Seiji Fujimoto.

What Is This DAWN?
The Cosmic Dawn Center (DAWN) is an international center for astronomy supported by the Danish National Research Foundation.

DAWN is a collaboration between the Niels Bohr Institute at the University of Copenhagen and the National Institute of Space (DTU Space) at the Technical University of Denmark.

The center will provide major telescope observations over the next decade of how and when the first galaxies, stars and black holes formed and evolved in the early universe.