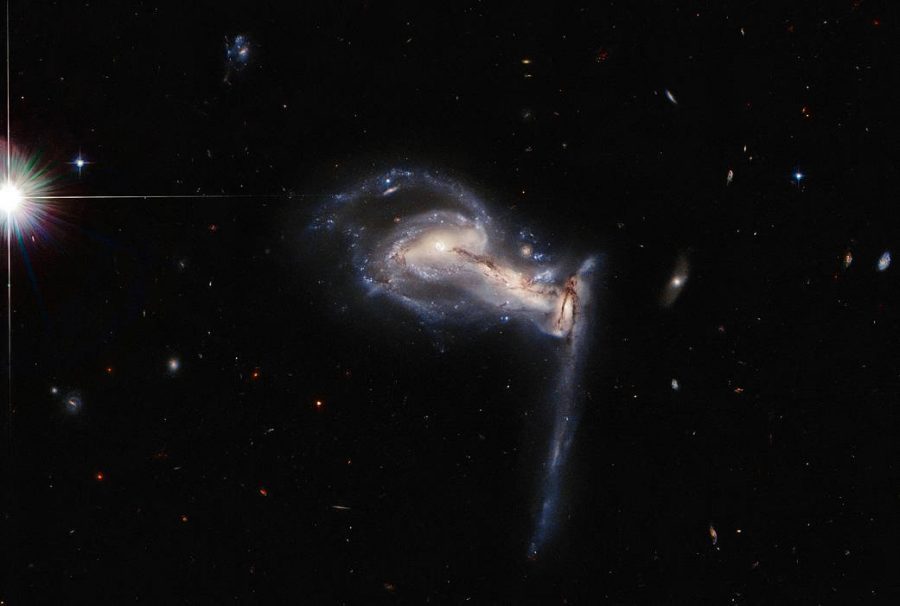 Fighting for space isn’t just an earth thing but also a universal tug of war between galaxies.

Recently, the Hubble Space Telescope imaged an intense tug of war in which three giant galaxies are being pulled by each other’s strong gravitational pull.

This image is an example of what happens when galaxies get too close. It also provides insight into the possible fate of our galaxy, projected 4.5 billion years from now.

When Did NASA Shared This Image?

On Friday, NASA shared photos of the Triangular Cluster. Hubble accepted this image as a “bonus image” during long observations. This bonus shot is more than just spectacular, it helps the space telescope team select their next Hubble target for long-term observations.

The cluster was filmed just two weeks after Hubble returned to work after a five-week operational leave. Last July, the Hubble team switched the spacecraft to standby equipment due to a payload computer problem.

Read: What is the relationship between Globular Clusters and Milky Way?

What Is This Cluster?

The cluster is known as Arp 195. It is located in Lynx, a constellation named after an animal that is common in the northern hemisphere. Arp 195 is about 389 light-years from Earth.

Arp 195 also appears in the Atlas of Peculiar Galaxies, a list of the strangest galaxies captured by Earth-based telescopes. The catalog was released in 1966 with 338 Galactic Monsters.

Read: What is beyond the edge of the observable universe?

The Arp 195 stands out in its peculiarity as it is a cluster of galaxies made up of three galaxies that are attracted to each other due to gravity.

How Did This Space Event Take Place?

Since a galaxy is a gigantic mass of gas, dust and billions of stars are held together by gravity. Even if two or more galaxies are in close proximity with each other, the gravity of the larger galaxies in the group will begin to attract gas from the all over galaxy.

Pulling of matter creates a so-called “leading arm”. In the picture, it appears to be a band of gas connecting the galaxies.

What Is The Outcome Of This Merger?

The galaxies merge into one, resulting in star formation and a surge in the amount of gases in the galaxy.

About 14 billion years ago, our galaxy was formed from huge clouds of gas and dust that collapsed under gravity. The cloud then formed two main structures: a spherical halo and a dense, bright disk.

Has Our Galaxy Ever Collided With Other Galaxies?

According to a popular theory which suggests that about 11 billion years ago, a small galaxy called Gaia Enceladus originally collided with the Milky Way.

This would have continued throughout the history of the galaxy. Astronomers believe that several small galaxies collided with the Milky Way over the years to form the massive structures today.

The last collision may have occurred 3 billion years ago when a dwarf galaxy collided with the center of the Milky Way.

Read: What will happen when the Milky Way and Andromeda galaxy collide?

Can Our Galaxy Collide With Any Other Galaxy?

In about 4.5 billion years, the Milky Way is expected to collide with our neighboring galaxy called Andromeda galaxy. It is based on the 2019 ESA assessment.

The Andromeda Galaxy is a barred spiral galaxy about 2.5 million light-years from Earth. It is the closest giant galaxy to our Milky Way.

What Will Happen To Our Solar System During The Collision Between The Milky Way And Andromeda?

When two giant galaxies collide with each other, they will push the Sun into other areas of the galaxy without damaging the solar system itself.

Since the stars in each galaxy are so far apart that they are unlikely to collide with each other. However, the stars will be scattered in different orbits around the center of the galaxy.

According to NASA, it will take another 2 billion years for the two galaxies to fully merge into one elliptical galaxy after the first collision. Also, it may take some time for the three galaxies that Hubble has captured to become one.