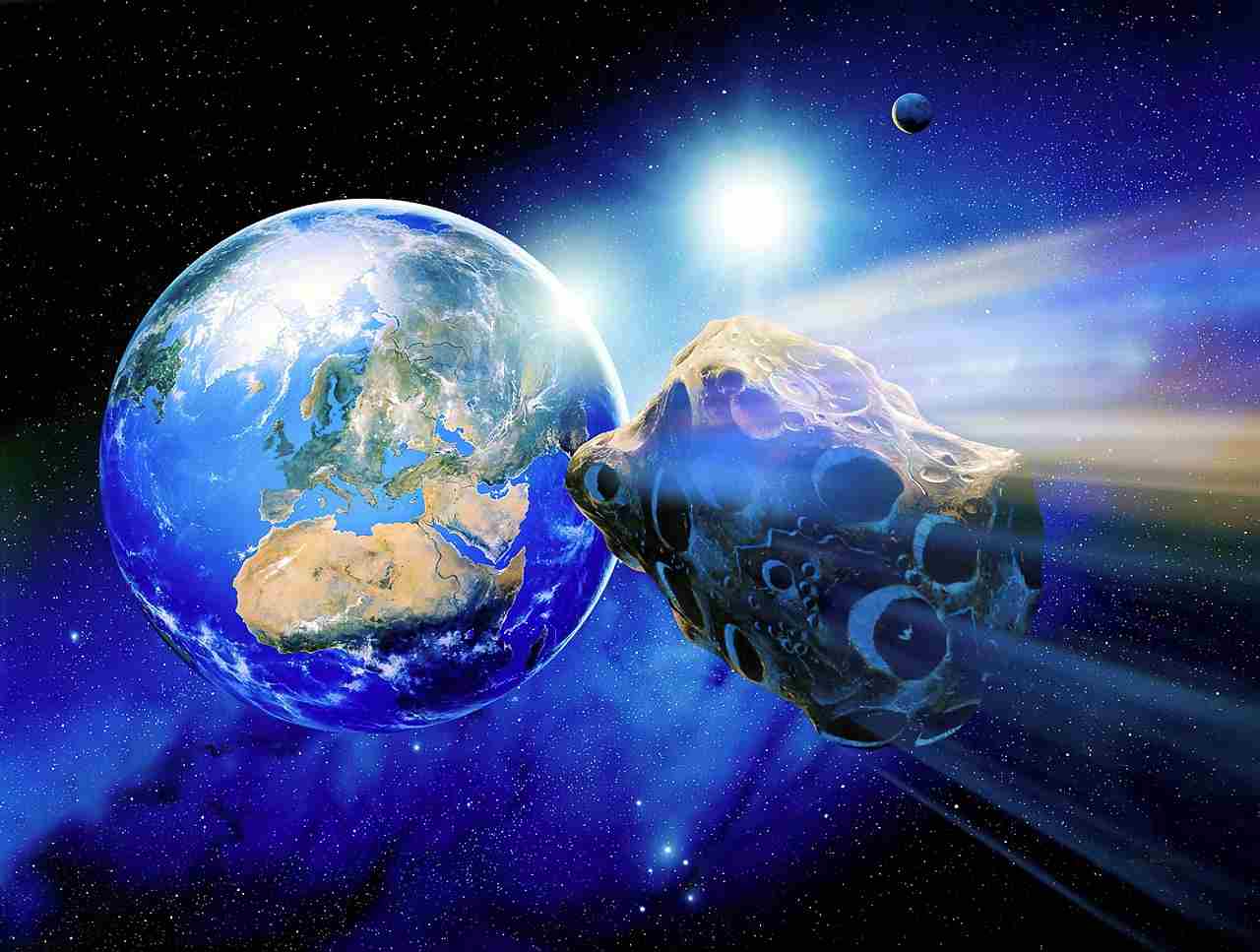 If the Earth gets hit by an asteroid, it’s game over. It’s control-alt-delete for civilization. An asteroid or a super volcano could certainly destroy us, but we also face risks the dinosaurs never saw: An engineered virus, nuclear war, inadvertent creation of a micro black hole, or some as-yet-unknown technology could spell the end of us.

Threats that could wipe out the bulk of life on earth abound. Planetary catastrophe could come in the form of a killer asteroid impact, the eruption of massive super volcanoes, a nearby gamma ray burst that sterilizes the earth, or by human-driven environmental collapse.

Asteroids have us in our sight. The dinosaurs didn’t have a space program, so they’re not here to talk about this problem. We are, and we have the power to do something about it. We don’t want to be the embarrassment of the galaxy, to have had the power to deflect an asteroid, and then not, and end up going extinct.

Asteroid 7482 is dangerously getting very close to the vicinity of our planet Earth this January 18. It is quite a gigantic Asteroid with a length of around a Km in distance.

Asteroids are quite common space giants dribbling on the imaginary planes of the solar systems in the universe. Astrologers have always commented about the different size, shape and stature passing through the vicinity of our planet. But Asteroid 7482 is somewhat very big in size, which ultimately possesses a great threat towards the natives of these planets.

This Asteroid is somewhat repeating its journey in a periodic way as it has passed our vicinity 30 years ago and will pass in the next 30 years after January 18. This time it will be considered as dangerously close to our planet in the next 200 years.

Read: What asteroid has the highest chance of hitting Earth?

The common question arises, what will the consequences if it hits the Earth? Based on the Telemetry data provided by the surveillance team of NASA, it seems that the Asteroid is sparing us slightly and will pass at a very uncomfortable close distance of 1 million miles, which is almost five times the distance from the Earth to the Moon.

NASA and its Centre For Near Earth Object Studies estimates that this Asteroid 7482 measuring approximately around one kilometres or 3280 feet will fly past our earth, getting scarily close on Jan 18 around 4:51 p.m.E.T. It was first discovered in 1994, this gigantic asteroid is named 7482(1994 PC1).

This fascinating and cosmic monster, which was first discovered in 1994, possesses no threat of colliding with our planet. But NASA labelled this asteroid as “potentially hazardous” because of its tail wiggling in our vicinity. This asteroid is quite fascinating as NASA and many space agencies didn’t expect to get so close to our planet or in the orbits of our vicinity again for centuries.

How close is it from our planet Earth?

Asteroid 7482 (1994 PC 1) poses no pitfall to our earth. It’s anticipated to drone around the earth, passing around 1.2 million country miles. Still, according to the Center for Near Earth Object Studies, NASA’s center for calculating asteroids and comet pathways and their odds of Earth impact, this asteroid is not crashing into us. In fact, as the Center for Near Earth Object Studies reports, nearly near-Earth asteroids (or NEAs) have been discovered by telescopes which cover the night sky. The centre finds around NEAS a time.

“There is no trouble with this asteroid hitting the Earth anytime soon,” says AccuWeather Meteorologist and astronomy expert Brian Lada. “ It was discovered in 1994 and scientists have a truly good understanding of its route.”

Over a million country miles down! In other words, it’s 5.15 times the distance from the Earth to the moon. On Jan. 18 Asteroid 7482 (PC1) is on course to make its closest connection at 451p.m. ET and is estimated to come within 1.2 million country miles of Earth. It will travel around mph.

According to Lada, the coming visit from this asteroid is multitudinous times in the future. “ The hassle is not predicted to take place until the time 2105,” says Lada. “ But it will be around 6 times further down than the moon.” So while Asteroid 7482 (PC1) is notable for its size and distance to the earth, it puts us in no pitfall.

“Although asteroid 7482 wasn’t discovered until 1994, scientists have been suitable to take enough obedience’s to figure out where the asteroid has been in history. So indeed, though we were ignorant of the asteroid back in 1933, NASA knows that it zipped past the Earth well before we knew of its actuality.”

Until then stay tuned till we come up with something more exciting and intriguing. Till then happy reading, happy learning and remember to support us!