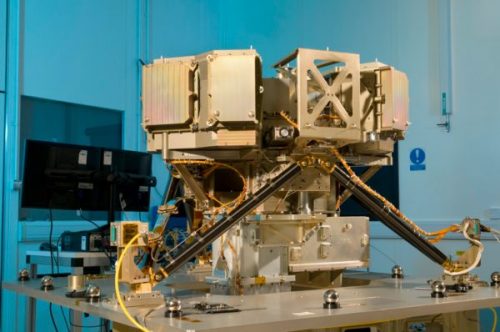 The Mid-Infrared Instrument MIRI on NASA’s James Webb Space Telescope is currently cooling to under 7 Kelvin with a helium gas cryocooler. As the cooler reached its final state, the Webb team is operating the MIRI instrument this week as part of the seventh and final stage of the telescope alignment.

When the instrument is in operation, its detectors and electronics generate heat that is balanced by a cryogenic cooler to keep the MIRI at a stable and very low operating temperature.

How Does Near Infrared Instruments Cool Down?

The near infrared instruments also warm up during operations and have to dissipate heat, although for these instruments this is done with passive cooling; the heat from the detectors and electronics is radiated into deep space.

What Is The Cooling Process Of The Mirrors In JWST?

When the instruments are at their operating temperatures, the telescope mirrors will also continue cooling down to their final temperatures, but they are not quite there yet.

The secondary mirror, hanging out on the end of its support structure a long way from any heat sources, is the coldest mirror, currently at 29.4 Kelvin. The temperature of 18 parts of the primary mirror is 34.4-54.5 Kelvin.

What Is The Advantage Of Beryllium Mirrors?

What Is The Present Condition Of The JWST Mirrors?

Since all mirrors are now below 55 Kelvin temperatures, MIRI is expected to be sensitive enough to do the planned study, but further cooling these mirrors will only improve performance. Webb’s team hopes the mirror can cool another 0.5 to 2 Kelvin.

Pointing the telescope at a celestial body, the telescope and sunshield will move together. The angle at which the sunshield points to the sun is called “pointing attitude”. The trace residual heat transferred to the main mirror through the five-fold sunshield depends on this position, and since the temperature of the mirror segment changes very slowly, the temperature depends on the average position over several days.

Read more: Do Aliens Exist: How JWST Will Solve Its Major Launch Objective?

Where Is Webb Currently Staying?

During Functioning, Webb is spending most of its time pointing to the ecliptic. This is a relatively hot attitude. While doing science operations this summer, the telescope will show a much more uniform distribution of pointings above the sky.

We have successfully achieved a milestone of 7 Kelvin for Miri to work because of its cryocoolers, but somehow if we got temperature less than that it will only increase the performance and efficiency of MIRI to work.

This will help us by providing information about the time for the mirror to cool down or warm up when the observatory is in that position for a particular period.