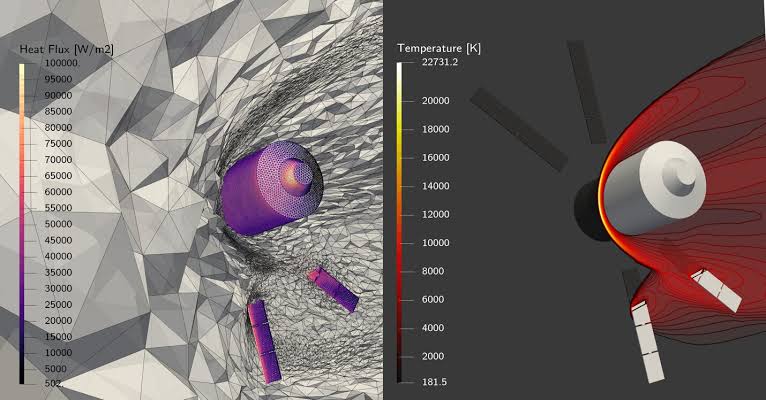 Starting with a three-dimensional cloud of connected points, referred to as a “computational grid,” the simulation of the Automated Transfer Vehicle (ATV) space truck reentering the atmosphere of Earth begins.

This is a step in the computational fluid dynamics modelling process for the hypersonic motion of gases surrounding the falling spacecraft.

The Investigation Of ATV

This investigation into the ATV’s demise was conducted in conjunction with the Department of Mechanical & Aerospace Engineering at the University of Strathclyde as part of the MIDGARD (Multidisciplinary modelling of the Aerothermodynamically-induced fragmentation of Re-entering bolides) activity of the ESA’s Open Space Innovation Platform.

By integrating highly precise but expensive, low-fidelity and quick simulation methodologies, this continuing project intends to reduce the uncertainty on the simulation of devastating atmospheric entry.

Five ATVs in total supplied the International Space Station between 2008 and 2015; each one was destroyed upon atmospheric re-entry. Based on Europe’s largest spacecraft, the NASA-ESA Orion spacecraft, which will fly on NASA’s first Artemis mission later this year and is meant to return humans to the Moon, will leave a more enduring legacy.

Although destructive atmospheric reentry is the conventional way for disposing of spacecraft and satellites after their useful lives, ESA and international rules demand that the risk of injury to people or property on the ground be less than one in 10,000.

Fábio Morgado of the University of Strathclyde, who is working on MIDGARD, asserts: “The need to manage the risk of atmospheric reentry of space debris is growing as there are more and more orbiting objects and reentry events happen more frequently. The forecast of the reentry processes is impacted by the slow fragmentation and thermal deterioration of the re-entering objects as a result of the severe aerothermal loads.”

“Improved modelling and simulation of the aerothermodynamically-induced fragmentation is important to design systems for safe demise and to analyse the accompanying ground impact risk,” Prof. Marco Fossati, the principle investigator of MIDGARD and Fabio’s supervisor, adds.

Heavy components, including fuel tanks or instrument optic benches, have occasionally reached the ground intact, but this can be prevented by modifying systems to employ lighter components or by making them more likely to disintegrate during reentry.

2 thoughts on “Perceiving ESA’s ATV Simulation Of How A Spacecraft Dies?”