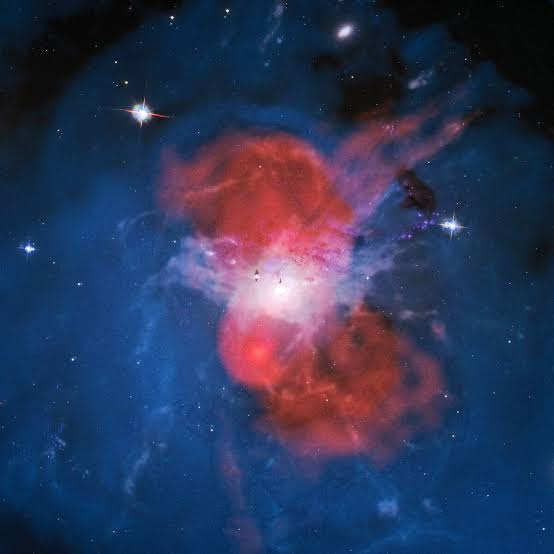 Amazing photos of galaxy clusters have been created by a team of researchers using two different telescope types in creative ways.

This not only creates stunning photographs but also adds to our knowledge of the vast quantities of energy emitted in the vicinity of supermassive black hole clusters.

The scientists will shortly publish their approach in the journal Astronomy & Astrophysics under the direction of Ph.D. student Roland Timmerman (Leiden University, Netherlands).

The Jets From The Supermassive Black Hole

Supermassive black holes at the centers of galaxies are known to emit enormous jets, according to astronomers. The gas in the surrounding area is heated by these jets as they fly outward from the black hole.

The jets create enormous lobes with a diameter of tens of thousands of light-years when they strike gas. These lobes may take hundreds of millions of years to disappear.

Therefore, the lobes provide astronomers with a wealth of information about what happened in a cluster, at least in theory. The problem is that the information is hard to get out of the lobes. Now that’s ended by an international group of astronomers.

They combined data from the radio observatory LOFAR in the Netherlands and the X-ray spacecraft Chandra.

The Amount Of Energy Released By A Black Hole.

Roland Timmerman, a researcher, said such a combination “provides a lot better sense of what is going on” (Leiden University, the Netherlands).

The phrase “the total is bigger than the sum of the parts here” is overused. The amount of energy that the black hole will inject into the cluster environment can be estimated rather well by Chandra and LOFAR on their own, but when combined, they are even more accurate.

This combination was previously impossible due to the lack of radio images with the same level of quality as Chandra’s X-ray photographs. The resolution is sufficient because LOFAR antenna stations are now dispersed throughout Europe.

The radio images that the astronomers now possess are as sharp as those taken with the Hubble telescope’s visible light. They imaged the Perseus cluster to showcase their method.

Approximately 240 million light-years away, in the general direction of the northern constellation Perseus, lies a collection of more than a thousand galaxies.

Astronomers are simultaneously constructing composite pictures of other galaxy clusters. They want to learn more about how galaxies and their environs interacted in the early cosmos using the underlying data.