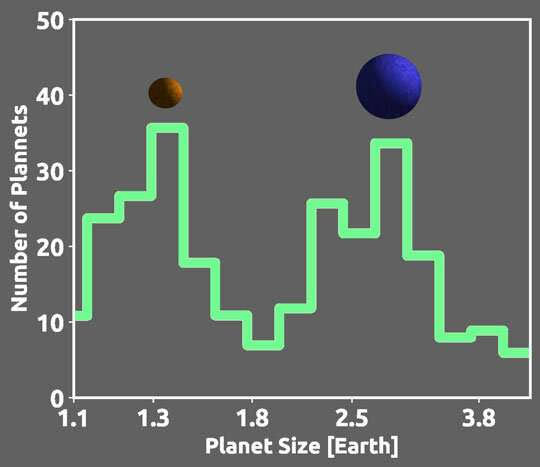 Two perplexing facts that have regularly surfaced among the more than 3,800 planetary systems lists to date can be explained by a new model that takes the interaction of forces operating on newborn planets into consideration.

Peas in a Pod, or adjacent planets of a similar size that have been discovered in a large number of planetary systems, is the second mystery. These include TRAPPIST-1 and Kepler-223, both of which have nearly-harmonious planetary orbits.

According to André Izidoro of Rice University, the study’s co-corresponding author, “I believe we are the first to explain the radius valley using a model of planet creation and dynamical development that self-consistently accounts for numerous constraints of evidence.” We can also demonstrate that an exoplanet’s peas-in-a-pod feature is consistent with a planet-formation scenario that includes large impacts.

Using a planetary migration model, Izidoro, a Welch Postdoctoral Fellow at Rice University’s NASA-funded CLEVER Planets project, and co-authors ran simulations of the first 50 million years of the evolution of planetary systems on a supercomputer.

In the scenario, young planets interact with the protoplanetary discs of gas and dust that give origin to them, drawing them nearer to their parent stars and trapping them in resonant orbital chains.

Within a few million years, the chains are broken when orbital instability brought on by the disintegration of the protoplanetary disc results in collisions between two or more planets.

The Significance Of Planetary Migration Models

Planetary systems that have kept their resonant orbital chains have been studied using planetary migration models. For instance, Izidoro and CLEVER Planets coworkers calculated the maximum amount of disturbance TRAPPIST-1’s seven planet system could have endured during bombardment and still maintained its harmonic orbital structure in 2021 using a migration model.

Izidoro collaborated in the new study with researchers from CLEVER Planets, Rajdeep Dasgupta and Andrea Isella from Rice University, Hilke Schlichting from the University of California, Los Angeles, and Christian Zimmermann and Bertram Bitsch from the Heidelberg, Germany-based Max Planck Institute for Astronomy.

Izidoro stated that the congestion caused by the movement of young planets towards their host stars regularly leads to catastrophic collisions that rob planets of their hydrogen-rich atmospheres. “That implies that massive collisions, such as the one that created our moon, are probably a common result of planet formation.”

According to the research, there are two different types of planets: mini-Neptunes, which are 2.5 times bigger than Earth and are rich in water ice, and super-Earths, which are dry, rocky, and 50% larger than Earth.

New observations, according to Izidoro, appear to validate the findings, which go against the conventional wisdom that both super-Earths and mini-Neptunes are only dry, stony worlds.

The scientists formulated hypotheses based on their observations that the James Webb Space Telescope of NASA can verify. For instance, they postulate that a portion of planets roughly twice the size of Earth will still have their original, hydrogen-rich atmosphere and be abundant in water.