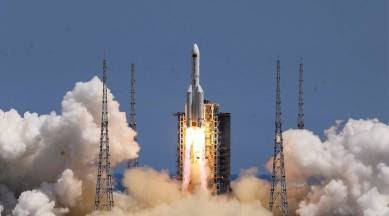 Reuters reported that space officials from the US and China verified that debris from a large Chinese rocket came back to Earth on Saturday over the Indian Ocean.

Around 12:45 PM EDT on Saturday, the US Space Command reported that the Long March 5B (CZ-5B) rocket re-entered over the Indian Ocean (16:45 GMT). For more information on the reentry’s technical features, such as the probable debris dispersal+ hit location, it tweeted, “We direct you to the PRC.”

What Is The Trajectory Of The Debris?

According to NASA, Beijing has not provided the “precise trajectory information” required to determine the potential locations of falling debris.The US Space Command said on Twitter on Saturday that it is still unknown what course the rocket debris may take and pointed inquiries to the Chinese authorities.

What Is The Weight Of The Debris?

According to a brief statement that was questioned by a US official, China’s spaceflight agency claimed that the 23 metric tonne (25.4 tonnes) Long March 5B’s wreckage crashed to Earth over water in the southwest Philippines. The “great majority” of the debris burned up upon reentry.

According to the New York Times, which cited updates on the social networking site Weibo, the Chinese Manned Space Agency asserted that the majority of the debris had burned up on re-entry over the Sulu Sea, between the island of Borneo and the Philippines.

What Are The Concerns For The Falling Debris?

NASA Administrator Bill Nelson was quoted by Reuters as saying that “all spacefaring nations should follow recognised best practices and do their bit to provide this type of information in advance to allow realistic projections of potential debris impact risk.” To secure the safety of humans on Earth and the responsible use of space, this is essential.

The Long March 5B.

The Long March 5B, China’s most potent rocket, launched on July 24 to deliver a laboratory module to the new Chinese space station being built in orbit. This was the rocket’s third flight since its initial launch in 2020. In 2020, pieces of a different Chinese Long March 5B fell on the Ivory Coast, destroying a number of structures there, although no injuries were reported.

According to Reuters, the Chinese Embassy in Washington declined to react right away. China stated earlier this week that it will watch the debris attentively but claimed that there was no danger to anyone on the ground.