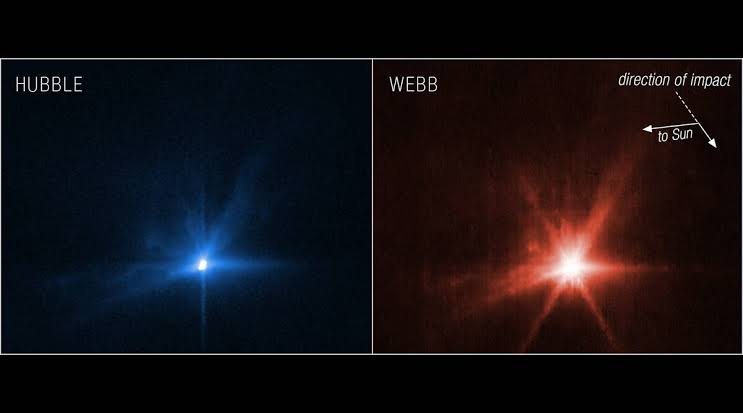 A groundbreaking NASA test for protecting Earth from future asteroids or comet threats was conducted right in front of two of NASA’s premier observatories.

Together, NASA’s Webb and Hubble space telescopes gathered data before and after the Double Asteroid Redirection Test (DART), which involved purposefully ramming Dimorphous, the asteroid moonlet in the Didymos double-asteroid system, at over 15,000 mph.

Related: What is the goal of the DART mission? 2022

Significance of Webb And Hubble

The combined capabilities of Webb and Hubble, on the same target, at the same time, will enable researchers to analyze a wide range of data relating to the composition and history of our solar system. Ground-based telescope observations will not only help determine how effective the test was in changing the asteroid’s orbit.

Two of NASA’s Great Observatories, the James Webb and Hubble Space Telescopes, have captured photographs of a unique NASA experiment designed to deliberately crash a spacecraft with a small asteroid in the first-ever in-space test for planetary defense. These photos of the NASA Double Asteroid Redirection Test (DART) impact represent the first time that Webb and Hubble have simultaneously examined the same celestial target.

Role Of Webb And Hubble The DART Mission

It was the first time the kinetic impact mitigation technology has ever been tested, which involves deploying a spaceship to divert an asteroid that doesn’t pose a threat to Earth and change its orbit. DART is a test for protecting Earth from possible asteroids and comet threats.

NASA Administrator Bill Nelson stated, Webb and Hubble show what we’ve long understood at NASA: We learn more when we work together.

“For the first time, Webb and Hubble have simultaneously taken images of the same cosmic object: an asteroid that has traveled seven million miles and been struck by a spaceship.

The discoveries concerning the DART mission and beyond that will be made by Webb, Hubble, and our ground-based observatories are eagerly anticipated by all of mankind.”

Related: Why is Nasa smashing a spacecraft into an asteroid with the Dart mission?

How Will The DART Mission Help Scientists?

Scientists will be able to learn more about the characteristics of Dimorphic’ surface, the amount of material ejected by the collision, and the speed at which it was ejected by combining observations from Webb and Hubble. Additionally, Webb recorded the hit in infrared, while Hubble recorded it in visible light, using distinct wavelengths of light.

The distribution of particle sizes in the spreading dust cloud will be revealed by observing the impact at a variety of wavelengths, allowing scientists to assess whether it emitted predominantly fine dust or a mix of large and small particles.

This data will be combined with ground-based telescope observations to assist researchers better understand how an asteroid’s orbit can be changed by a kinetic collision.

Before and After Impact Sites Are Captured by Webb

Prior to the collision, Webb made one observation of the impact location. Then, over the course of the following few hours, he made additional observations. A tight, compact core is visible in images from Webb’s Near-Infrared Camera (NIRCam), with material plumes appearing as wisps streaming away from the impact site.

Given the asteroid’s rapid ascent through the sky, viewing the impact with Webb posed special difficulties for the mission operations, planning, and science teams.

The teams put in further effort in the weeks before the impact to enable and test a means of tracking asteroids traveling more than three times faster than the initial speed limit set for Webb as DART approached its target.

Principal investigator Cristina Thomas of Northern Arizona University in Flagstaff, Arizona, stated of the Webb Mission Operations team that helped make this possible, “I have nothing but incredible admiration for the people who made this a reality.” “I’m incredibly thrilled that this has happened. We have been planning these observations for years, then in detail for weeks.”

How Will Webb Be Useful In Near Research Observations?

In the upcoming months, researchers also intend to use Webb’s Mid-Infrared Instrument (MIRI) and Near-Infrared Spectrograph to study the asteroid system (NIRSpec). Researchers will learn more about the asteroid’s chemical makeup via spectroscopic data.

Over the course of five hours, Webb observed the effect and took ten pictures. The information was gathered as part of the Association of Universities for Research in Astronomy’s Webb Cycle 1 Guaranteed Time Observation Program 1245, which was directed by Heidi Hammel (AURA).

Ejecta from the impact are visible as beams extending from the asteroid’s body. The more prominent, widely spread out spike of ejecta to the left of the asteroid is in the general vicinity of where DART came from.

Why More Observation Is Required For Further Information?

Astronomers need to look more closely in order to interpret some of the beams’ apparent small curves. Astronomers determined from the Hubble photos that the brightness of the system increased three times after impact and remained constant even eight hours later.

Over the next three weeks, Hubble intends to check in on the Didymos-Dimorphous system 10 more times. The ejecta cloud’s expansion from the ejection to its disappearance will be better depicted by these consistent, rather long-term measurements as it changes over time.

Jian-Yang Li of the Planetary Science Institute in Tucson, Arizona, who oversaw the Hubble observations, stated of his reaction to the findings: “When I saw the data, I was genuinely flabbergasted, astounded by the remarkable clarity of the ejecta that Hubble acquired.” I consider myself fortunate to have been present for this moment and to have contributed to its success.

In the moments leading up to and soon after DART’s collision with Dimorphous, Hubble snapped 45 photos. The General Observers Program 16674 of Cycle 29 included the Hubble data collection.

According to Andy Rivkin, DART Investigation Team Lead at the Johns Hopkins University Applied Physics Laboratory, “This is a unique view of an extraordinary occurrence.”