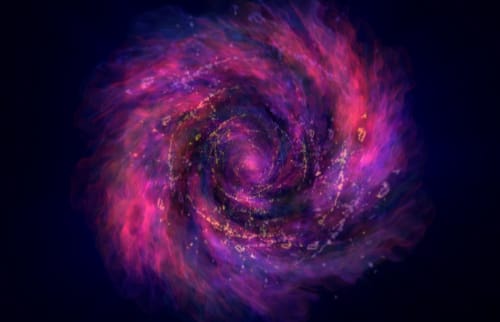 Although dark matter has never been seen, astronomers believe that it accounts for 85% of the universe’s matter. In a nutshell, no one is aware of what dark matter is.

Lord Kelvin proposed it as an explanation for the star velocity in our galaxy more than a century ago. Years later, Swedish astronomer Knut Lundmark made the observation that there must be a lot more stuff in the universe than what we can see.

Using ever-complicated technologies, researchers have been trying to identify this elusive molecule since the 1960s and 1970s. A rising number of physicists believe that the absence of dark matter may be the solution, nevertheless.

The Backstory Of Dark Matter

In order to make the most sense of what they are seeing, scientists frequently spend years gathering data and then going through it to be analyzed.

As additional evidence came in, it became immediately evident that galaxies were not acting in the way that was predicted. Some galaxies’ outer edges had stars that were traveling far too quickly. The gravitational attraction that holds galaxies together is strongest in the core, where the majority of the mass is located.

The force of gravity produced by the observable matter at the outer margins of disc galaxies couldn’t have prevented the fast-moving stars from shooting out into deep space. There must be more matter in these galaxies than what we can currently see, according to scientists.

They called whatever was preventing the stars from vanishing to be dark matter. They were unable to pinpoint any specific characteristics, other than the fact that it must have a strong gravitational attraction.

How Much Dark Matter Is There In Our Universe?

In actuality, dark matter must make up an astounding 85% of the cosmos. Galaxies would not have been able to last for as long as they do otherwise. Because there wouldn’t have been enough gravity to hold the trillions of stars in place, they would have disintegrated.

Why’s There Still A Question On The Existence Of Dark Matter?

The issue with something you can’t witness in science is that there’s not much you can say about it.

All of our evidence for dark matter is indirect since it does not interact with the electromagnetic force, which generates radio waves, x-rays, and visible light. Without much success, scientists have been trying to figure out how to study dark matter and make predictions based on its ideas.

Is There Any Possible Solution?

The majority of large-scale events are fairly adequately explained by Newton’s theory of gravity. Newton’s theory may be used to explain everything, from the first pitch at a Yankees game to the movements of constellations. The theory is not error-free, though.

For instance, evidence that Newton’s theory was unable to explain was explained by Einstein’s general and special theories of relativity. Because it has considerably simpler equations and works in the vast majority of situations, scientists continue to utilize Newton’s theory.

It was suggested that dark matter could bridge the gap between the data and Newtonian physics. But what if a revised theory is required, not reconciliation?

Mordehai Milgrom, an Israeli scientist, enters at this point. In 1982, he created a theory of gravity known as Modified Newtonian Dynamics, or simply “Mond,” which proposes that gravity behaves differently when it is extremely weak, such as around the edge of disc galaxies.

His hypothesis predicts galaxy behavior rather than just explaining it. Theories have the drawback of being able to explain almost anything. If you enter a room and notice that the lights are on, you might come up with the notion that the room is lit by cosmic rays from the sun that are striking hidden mirrors precisely at the right angle. Another possibility is that someone turned on the light.

Examining which theory makes more accurate predictions is one approach to distinguishing between good and bad theories.

Mond offers considerably better predictions than conventional dark-matter models, according to a recent study. That suggests that while dark matter can adequately describe the behavior of galaxies, it is a less effective explanation overall, at least in this area.

The issue of dark matter and Mond will only be resolved with additional information and discussion. The rejection of decades of scientific agreement and the acceptance of Mond as the best explanation, however, would render one of the universe’s more enigmatic characteristics as much more normal.
Although dark, invisible forces may not be as appealing as a modified hypothesis, however, it might simply be superior in terms of science.