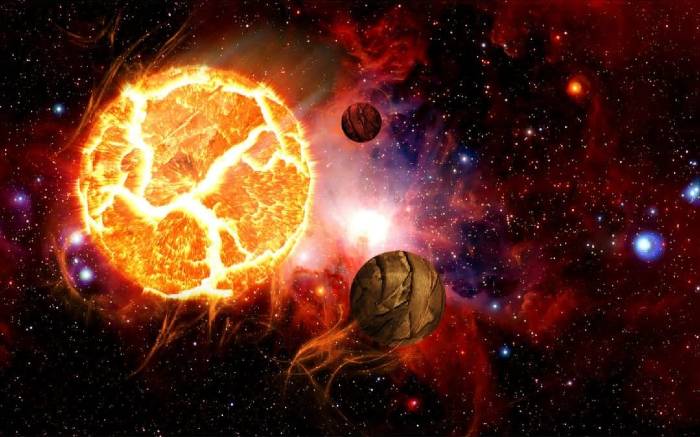 Although the sun is undoubtedly one of the brightest space objects in the visible sky, it isn’t the brightest object in the universe.

This is an understatement of the year. Let us first define what the word “brightness” means before attempting to determine what it is.

What Is ‘Brightness’ In Real?

The amount of light emitted by a blazing object that actually reaches our eyes is measured as brightness. What makes everything a little bit more perplexing is the fact that brightness is relative to the distance between the viewer and the item.

The sun is bright, but if you hold a 100-watt light bulb up to your face, it will appear just as bright. In actuality, it is almost as bright.

We will now focus on “absolute” brightness rather than apparent brightness. As a result, we first need a scale of measurement in order to put things into context and accurately assess the brightness level of items. Assuming that we are viewing them from the same distance, this should be simple to accomplish.

Here are some of the Brightest Space Objects.

The Brightest Object In Our Solar System- Sun

The Brightest planet In Our Solar System – Venus

The brightest planet in our solar system is also the nearest to the sun. If you know just where to look, it can glow as brightly as magnitude -4.7, bright enough to be seen during the day.

Venus’s brightness is due in great part to its dense, reflecting clouds as well as to its close proximity to Earth. The brightness of Venus fluctuates with its distance from Earth and its phase, as it does with all the other objects in the solar system.

Venus exhibits phases as it orbits Earth inward. Throughout late 2020, Venus was visible in our morning sky, rising in the east just before daybreak. However, it will soon be leaving our skies for a few months as it moves away from Earth and behind the sun. In May 2021, Venus will appear once more in our evening sky. In the planet guide on EarthSky, you can find Venus’ position every month.

The Brightest Star In Our Universe- R136a1

This star with an unflattering moniker is 256 times as big as the sun. Although it may not be the largest star in terms of volume, it is the most massive and brightest star in the universe. 8.6 million times brighter than our Sun is this enormous object.

The Earth would be a thousand times hotter than it is now if something as bright were as close to us as the Sun, and we wouldn’t have had a chance to survive. Brighter than the Sun doesn’t quite have the same ring to it any more, does it?

The Brightest Event In Space- Supernovas

Supernovas are violent explosions that happen when stars die because they run out of hydrogen to power the internal nuclear reactions. Gamma Ray Bursts, a type of flash of radiation that can be released by supernovae, have a grandiose scale that dwarfs R136a1.

In just a few seconds, a single gamma ray burst can produce as much energy as our Sun does over the course of its entire 10 billion-year life. Astronomers believe that if such a beam were to impact Earth, even from a million light years away, it might deplete our ozone layer by 25%, resulting in a mass extinction.

These episodes, however, are extremely transient, lasting only a few minutes, and occasionally just a few milliseconds. These aren’t the universe’s heavy hitters, despite being brighter than the brightest stars.

The Brightest Object In The Universe- Quasars

The darkest things in the universe—black holes—are the only ones that allow the brightest things in the cosmos to exist. A black hole is unimaginably large and, by definition, is dark. Due to its enormous mass, the object’s gravitational pull is so powerful that even light cannot escape it. As light must reflect from something in order to be seen, this renders them invisible.

This explains why black holes are naturally so dark. Occasionally, stars in close proximity to black holes are irresistibly drawn into them due to the gravitational force that prevents anything nearby from escaping. The enormous quantities of energy produced by black holes consuming stars are anything but gloomy.

In the beginning, the gas and stardust from the black hole whirls around it, forming cosmic cylinders known as “accretion discs.” Even galaxies pale in contrast to the energy produced by friction in these discs. The next amazing occurrence is the formation of a QUASAR, which Occurs when the black hole consumes the stars completely.

Compared to entire galaxies with billions of stars, these quasars shine thousands of times brighter and are regarded as the brightest objects in the universe. They are located in regions where there are also other galaxies, but the luminosity of the quasar quickly overpowers these galaxies.
Examining a photograph taken by the Hubble telescope can help us understand the brightness of quasars from yet another angle.

Think about what being a light year away from something actually implies if you’re wondering why these quasars are so far away. Whatever you are actually seeing is what the star looked like a year ago because it takes light from a star one light year away to travel to you.

They are actually relics from the beginning of the cosmos, when conditions were more chaotic.

There are many bright objects in space but since we haven’t seen the distant galaxies we can’t say that there will not be any other brightest object in our universe. The fact that the brightest deep space objects exist because of the things that were once thought to be the darkest things in the universe is extremely intriguing. A black hole needs to devour an average of 10 stars annually, according to eminent scientist Neil Degrasse Tyson, in order to be able to create a quasar (roughly 30 million times the mass of Earth).

However, given that Andromeda, one of our nearby galaxies, is on a collision course with the Milky Way, scientists think that this collision may create the circumstances necessary for the formation of a quasar. There’s no need to worry; it won’t occur for 4 billion years.