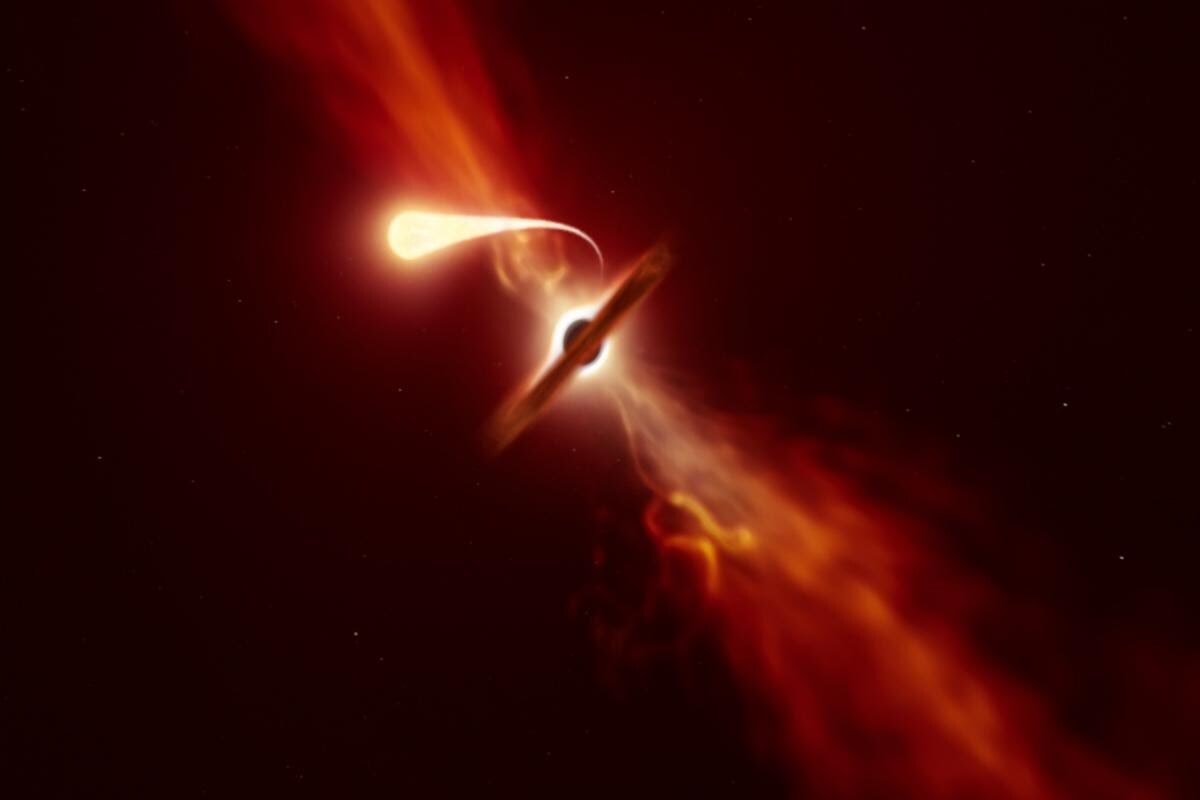 What occurs if a star strays too near a supermassive black hole? The most obvious explanation is that it is dragged in and disappears forever. On the way in, some of its material becomes superheated, which releases a significant amount of radiation—typically X-rays. That explanation is insufficient but not incorrect.

Thanks to a group of astronomers from the University of California, Berkeley, there is more to the story. They investigated a tidal disruption incident at Lick Observatory using a customized spectrograph. A star came into contact with a black hole there. What they discovered surprised them.

Throughout the Universe, supermassive black holes can be found in galaxies. Unusual things occur when a star approaches one.

Other phenomena may also occur, according to recent research of tidal disruption events. For instance, the event’s powerful outward winds cause part of the material from the dying star to be sent into space. It all contributes to its peculiarity.

Wenbin Lu, an assistant professor of astronomy at the University of California, Berkeley, stated that one of the most bizarre things a supermassive black hole can do is tear a star with its powerful tidal forces.

How Can Scientists Confirm The Existence Of Supermassive Black Holes?

One of the few ways astronomers may confirm the existence of supermassive black holes at the centers of galaxies and gauge their characteristics is through star tidal disruption events.

However, because numerically calculating such events requires such a high processing cost, astronomers still don’t fully comprehend the intricate processes that follow a tidal disruption.

Why Is It Important To Study Stars?

Studying a real star as it meets its demise is crucial for this reason. The Berkeley team focused on one in an event known as “AT2019qiz” that came dangerously close to a black hole.

The catastrophe took place in a spiral galaxy in the constellation Eridanus, 215 million light-years from Earth. The star was torn apart as it spiraled into the accretion disc. Then, something totally unexpected took place. Additionally, seeing it required some extra effort.

The Observations From The Event

The team members chose to analyze the disruption event in polarized light in order to better understand what was going on because it appeared to be fairly brilliant in optical light. Light intensity is decreased because polarized light waves only move in one plane. (Polarized sunglasses, which are used to cut down on glare, operate on the same concept.)

In this instance, the team’s ability to view the star’s destruction afterwards was made possible by the use of polarized light. They typically aren’t allowed to see that. They also didn’t observe the quantities of X-rays predicted based on observations of other comparable incidents.

The spectropolarimetry observations for AT2019qiz showed that a large amount of the star’s material never made it.

Some were spread out in space. However, the black hole’s powerful winds also produced a spherically symmetrical, fast-moving cloud of remnant star matter. It was moving at a speed of around 10,000 kilometers per second, according to the scientists. There were definitely some shocks from that cloud.

The Significance Of This Event

Alex Filippenko, an astronomy professor at the University of California, Berkeley, and a part of the research team, said that this is the first time the geometry of the gas cloud surrounding a tidally spaghettified star has been determined.

The lack of abundant high-energy X-rays from this and other comparable tidal disruption occurrences is explained by this novel view of the disruption of a star.

What Are Scientists Going To Observe Now?

Polarized light is a crucial tool for investigating what transpires when other stars come into contact with supermassive black holes. Astronomers can also access events occurring in the black hole’s accretion disc thanks to this. It’s not a simple job.

Filippenko noted that because these disruption events are so far away, it is impossible to investigate their geometry or their explosions’ structural details.

But by analyzing polarized light, we can learn more about how the materials in that explosion were distributed or, in this example, how the gas – and possibly the accretion disc – is structured around this black hole.

To map these events, polarized light from these kinds of bright “eruptions” is a useful tool. Finally, even if a tidal disruption event is occurring in a galaxy far, far away, such observations could contribute to creating a “tomographic” picture of the event as it develops.