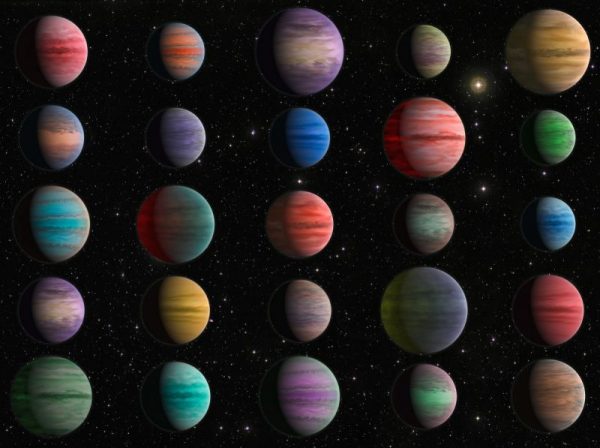 A diverse team of astronomers from around the world are studying the Hubble Space Telescope observations of 25 “hot Jupiter’s” to try to answer five unsolved questions for better understanding of the atmospheres of the exoplanets.

What Did They Find In The Observation?

Researchers have found, among other things, that the presence of metal oxides and hydrides in the hottest atmospheres of exoplanets is clearly related to the atmosphere which is being thermally inverted.

The field of exoplanet science has long shifted its focus from simple detection to characterization, though characterization is a very challenging task in this reference.

To date, most of the study on characterization is focused on modeling or studying one or more exoplanets. But the new study, led by the University College London (UCL) researchers, estimated the atmospheres of 25 exoplanets using the most recorded data ever collected from a single exoplanet atmosphere survey.

Most of the data was taken from the observations made by NASA/ESA Hubble Space Telescope.

Lead author Quentin Changet explains: “Hubble has made it possible to characterize 25 exoplanets in detail, and thanks to ten intensive observational campaigns, the amount of information we have gathered about their chemical makeup and formation is enormous.”

What Was The Aim For The Observation?

The science team aimed to answer five unsolved questions about exoplanet atmospheres, an ambitious goal they were able to achieve.

Their question was about what H- and some metals could say about the chemical composition and circulation of exoplanetary atmospheres and planet formation.

They decided to explore a wide range of hot Jupiter with the intention of identifying trends in the sample that could provide a more general idea of the exoplanet’s atmosphere.

Research co-director Billy Edwards of UCL and Director of Nuclear and Alternative Energy (CEA) said: “To explore 25 exoplanet samples, the team has reanalyzed vast amount of historical data comprising 600 hours of Hubble observations, plus more than 400 hours of observations from the Spitzer Space Telescope. Their data includes eclipses for all 25 exoplanets and transits for 17.”

Significance Of Observation Of Solar Eclipse

Eclipses and transit data could provide important information about the atmospheres of exoplanets.

The results of the large-scale study have resulted in the team being able to identify clear trends and correlations between the atmospheric composition of exoplanets and their observed behavior.

Some of their key findings relate to the existence of thermal reversals in the atmospheres of exoplanet samples.

They found that almost all exoplanets with thermally inverted atmospheres are extremely hot, with temperatures exceeding 2,000 degrees Kelvin.

It is important to note that the metal particles TiO (Titanium Oxide), VO (Vanadium Oxide) and FeH (Iron Hydride) are hot enough to be stable in the atmosphere. Almost all exoplanets exhibiting thermal inversion have been found to have H-, TiO, VO or FeH in their atmospheres.

An important aspect of this study is that it can use many exoplanet samples and very large amounts of data to identify trends that the team can use to predict the behavior of other exoplanets.

This is very useful because it gives an idea about how planets are formed and allows other astronomers to plan their future observations more efficiently.

Even if we study a single exoplanet in great detail, it is worthwhile, but it is much more difficult to estimate trends. A deeper understanding of exoplanet populations could also bring us closer to unraveling the mysteries of our solar system.

As Changeat says: “Many questions, such as the origin of water on Earth, the formation of the Moon, and the various evolutionary histories of Earth and Mars, remain unresolved despite our ability to measure in the field. A large-scale exoplanet population study, such as the one we present here, aims to understand this general process.”