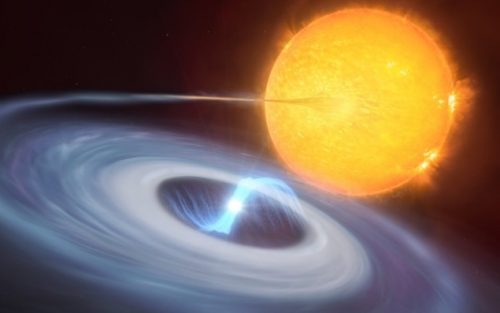 Astronomers from the California Institute of Technology (Caltech) and other institutions have identified two new polars by examining data from the Spektr-RG (SRG) space observatory and the Zwicky Transient Facility (ZTF). A paper detailing the discovery was released on the arXiv preprint repository on June 9th.

What Are These CVs?

CVs are binary star systems in which one star is a white dwarf and the other is a normal star. They brighten up by a big factor seldom, then dim back down to a quiescent state.

Polars are a type of cataclysmic variable that differs from others in that their white dwarfs have an extremely strong magnetic field.

“Through a crossmatch of the eFEDS dataset with ZTF archive photometry, we uncovered two polars: ZTFJ0850+0443 and ZTFJ0926+0105,” the researchers stated.

According to the research, ZTFJ0850+0443 is an eclipsing polar with an orbital period of 1.72 hours that orbits the Earth at a distance of 3,260 light years. The partner star’s mass is predicted to be around 0.12 solar masses, while the white dwarf has a mass of roughly 0.81 solar masses. The findings indicate that ZTFJ0850+0443 is a low-field polar with a magnetic field strength of less than 10 MG.

ZTFJ0926+0105 is a non-eclipsing polar with an orbital period of around 1.48 hours at a distance of about 1,200 light years. It has a polar magnetic field strength of at least 26 MG, which is more normal. The researchers were unable to determine the mass of the white dwarf since ZTFJ0926+0105 is not eclipsing.

What Were The Astronomers Observations?

The astronomers concluded that their discovery demonstrates the value of the eFEDS survey in complementing ZTF in the search for new catastrophic variables. Furthermore, they stated that using the ESA’s Gaia satellite, accurate luminosities of the newly discovered polars will be available. In this regard, Gaia Data Release 3 (DR3), which was released on June 13, may be quite valuable.

Rodriguez’s research is part of a bigger follow-up investigation of the eFEDS/ZTF footprint. Such research could help overcome observational biases in past optical-only searches for cataclysmic variables, and it could lead to more accurate volume-limited CV investigations.