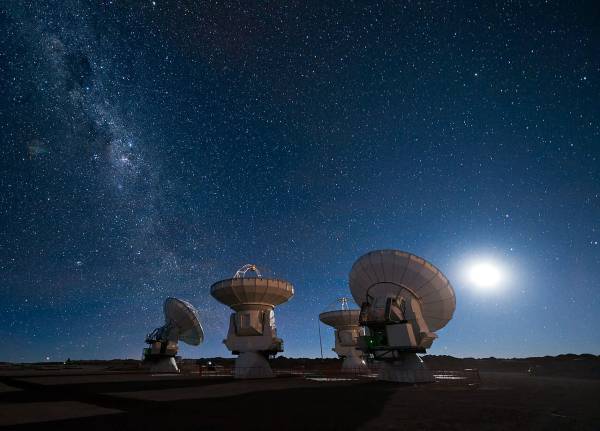 For the first time, a multinational team of astronomers used the strength of 64 radio telescopes dishes to discover the tiny traces of neutral hydrogen gas on cosmological scales.

The achievement was accomplished with the MeerKAT telescope in South Africa, which is a predecessor to the SKA Observatory (SKAO), the world’s largest radio observatory, which will investigate the universe in unparalleled detail.

The Significance Of SKAO

Understanding the evolution and substance of the universe, as well as the mechanisms that drive its accelerating expansion, is a fundamental goal of the SKAO. Observing the structure of the universe on the biggest scales is one technique to do so.

On these scales, entire galaxies can be viewed as single points, and the distribution of these points offers information about the nature of gravity as well as unexplained entities like dark matter and dark energy.

Related: How Hubble Telescope Helps In Measuring The Age And Size Of The Universe?

Why Are Radio Telescopes Used To Detect Radiation?

Radio telescopes are ideal for this because they can detect radiation from neutral hydrogen, the most abundant element in the universe, at wavelengths of 21cm. We investigate the whole distribution of matter in the universe by studying 3D maps of hydrogen spanning millions of light-years.

The SKAO is now under construction with its headquarters at Jodrell Bank, Cheshire. Pathfinder telescopes, such as the MeerKAT 64-dish array, are already in place to influence its design. MeerKAT, which is based in the Karoo Desert and operated by the South African Radio Astronomy Observatory (SARAO), will eventually be integrated into the entire SKAO.

How Would MeerKat And SKAO Be Useful?

MeerKAT and SKAO will largely function as interferometers, with the array of dishes combining to form a single massive telescope capable of imaging distant objects with high resolution. “However, the interferometer will not be sensitive enough to the biggest scales that cosmologists investigating the cosmos are interested in,” said Steven Cunnington, co-lead author of the new research report.

The team from the University of the Western Cape has been driving the single-dish mode of operation, with many MeerKAT observations already completed. Many more institutions from four continents are involved in this huge effort.

“As a result, we employ the array as a collection of 64 individual telescopes, allowing them to survey the massive sky volumes required for cosmology.”

A team led by Manchester-based astronomers Cunnington, Laura Wolz, and Keith Grainge present the first ever cosmic detection utilizing this single-dish technique in a new paper published on arXiv and submitted for publication.

Observations Of The Maps?

The latest discovery is a shared clustering pattern between MeerKAT’s maps and the optical Anglo-Australian Telescope’s galaxy locations.

The remarkable statistical link between the radio maps and the galaxies indicates that the MeerKAT telescope is detecting large-scale cosmic structure, which is known because these galaxies trace the general matter of the universe.

Why Is This So Unique?

This is the first time a multi-dish array acting as individual telescopes has been used to make such a discovery. This approach will be used across the SKAO, marking a key milestone in the cosmological science case with the SKAO’s plan.

Cunnington disclosed, “This finding was made with just a small quantity of pilot survey data.” “It’s exciting to think about what MeerKAT will accomplish in the future.”

“For many years, I’ve been attempting to forecast the SKAO’s future capabilities. It’s really exciting to be at a point where we’re developing the tools we’ll need and demonstrating their effectiveness with real data. This is just the start of what we hope will be an ongoing display of results that increases our knowledge of the universe.”