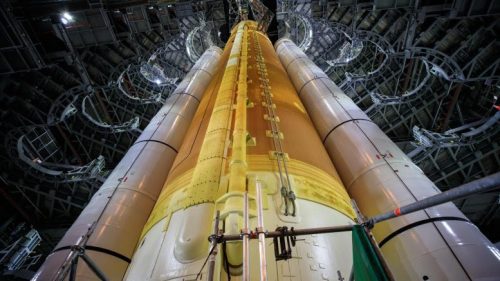 On June 6, the Space Launch System (SLS) rocket and Orion spacecraft are scheduled to return to NASA’s Kennedy Space Center in Florida for the next wet dress rehearsal attempt before the Artemis I moon mission.

When will Be The First Motion Ahead of Artemis I Moon Mission?

The first motion is expected to happen at 12:01 a.m. on June 6th, with tanking operations starting no earlier than June 19.

The rehearsal is the last step before launch, and it requires NASA to put propellant into the rocket’s tanks, perform a full launch countdown, demonstrate the ability to recycle the countdown clock, and drain the tanks in order to practise the launch schedules and procedures.

The hatches, or access points of the crew module and launch abort system have now been closed in preparation for rollout. While the spacecraft and rocket are at the launch pad, engineers put rain gutters on the crew access area to keep moisture out of the crew module.

In preparation for their return to the launch pad, teams have begun retracting the service platforms that surround the Moon rocket and spacecraft in the VAB for rollout configuration.

The launch of the SLS rocket and the Orion spacecraft from VAB, as well as their arrival at launch 39B, will be broadcast live on NASA’s website.