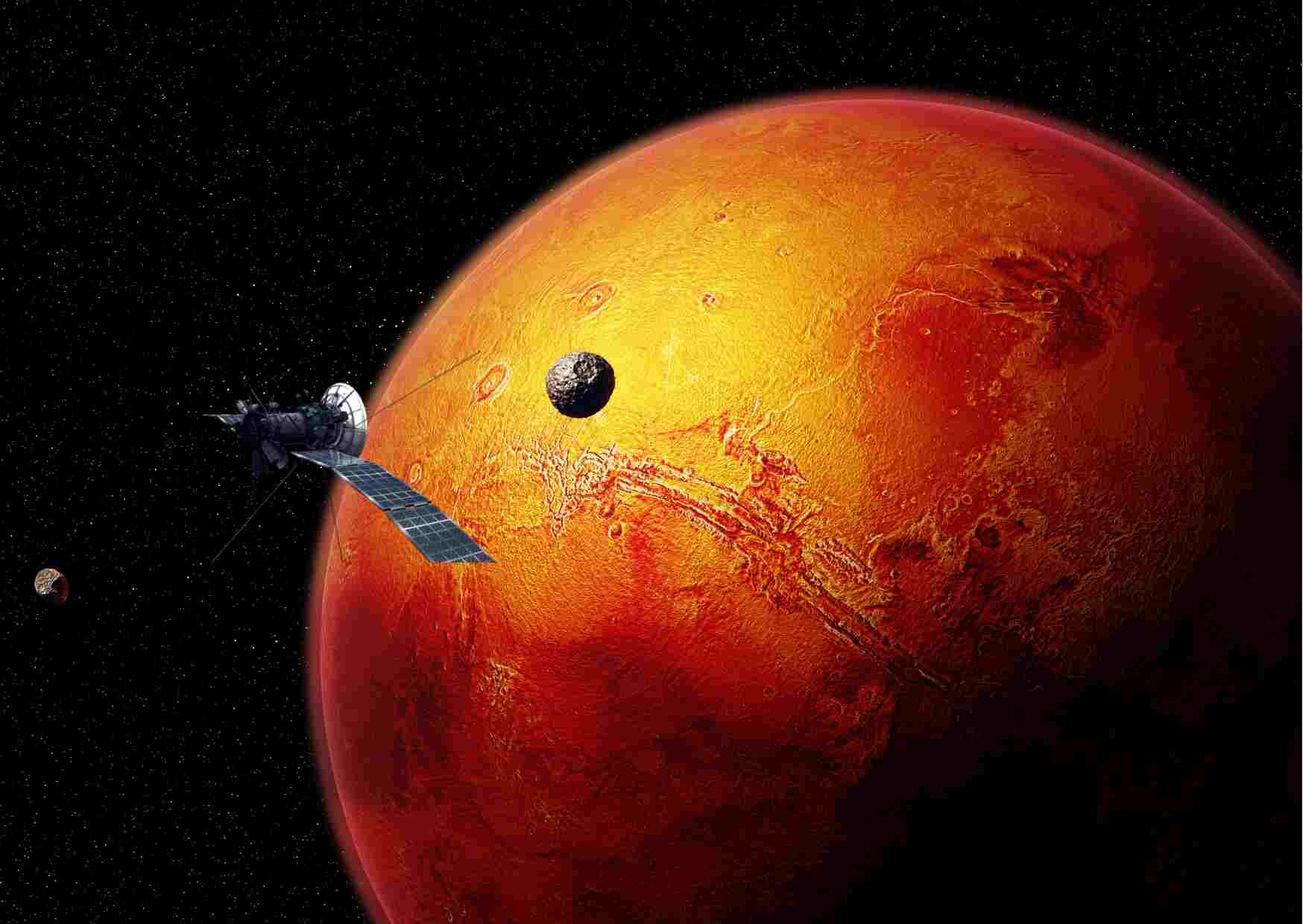 The planet Mars is such a shadow on the minds of our scientists that they do not even care about its satellites. Our scientists have been successful in making even a map of Mars.

Satellites and rovers of many countries have reached here, which are exploring all the possibilities of studying the signs of life. From here on Earth to taking a human expedition to Mars, many types of research and experiments are going on. But a new study by the Japanese space agency JAXA suggests that scientists should also look for signs of ancient life on Mars’ moon Phobos.

What is the purpose of exploring Mars’s moon?

In the 1960s, humans began to discover what the red planet has to teach us. Now, NASA hopes to land the first humans on Mars by 2030. Mars has fascinated humans since we first saw it as a star-like object in the night sky. At first, its reddish hue set the planet apart from its glittering brethren, each captivating in their own way, but no one else has traced a reddish arc across the sky from Earth.

Then, in the late 1800s, telescopes first revealed a surface filled with intriguing features, patterns, and landforms that scientists initially mistakenly attributed to a vibrant Martian civilization. We now know that there are no man-made constructions on Mars.

But we’ve also learned that until 3.5 billion years ago, the dry, toxic planet we see today might once have been as habitable as Earth. Since the 1960s, humans have set out to find out what Mars can teach us about the growth and evolution of planets, and whether it ever harbored extraterrestrial life.

So far, only unmanned spaceships have made the trip to the King Planet, but that may soon change.NASA hopes to land the first humans on Mars by 2030, and several new missions will be launched by then to advance exploration.

Exploring Mars is helping scientists learn about climate change that can dramatically alter planets. It also makes it possible to search for bio-signatures, signs that could reveal whether life was abundant in the planet’s past and if it still exists on Mars today.

Now scientists at Japan’s space agency said they plan to bring soil samples from Mars before the US and China. Let us tell you that Japan has started its mission to Mars only last year. JAXA ( Japan aurospace agency ) plans to send an explorer in 2024 which will land on the land of Phobos (Moon of Mars) and bring 10 grams of soil samples from there. Going to do. With which they are planning to return to Earth in 2029.

Project manager Yashuhiro Kawakatsu said in news conference online that despite the delayed start, this quick return trip is expected to keep Japan ahead of the US and China in bringing samples from the Martian region.

America’s Perseverance rover landed on the surface of Mars

NASA ( American space agency ) Perseverance rover landed on the surface of Mars, from where it will return to Earth by 2031 with 31 samples. After this, in May, China became the second country to reach the surface of Mars and its vehicle is also expected to return by 2030 after taking samples to Earth.

China landed its spacecraft on Mars in May and they plans to bring back samples around 2030. Kawakatsu told that JAXA scientists believe that 0.1 percentage of the surface soil on the Phobos comes from Mars and that 10 grams contains about 30 granules, depending on the consistency of the soil.

Professor of the Institute Tomohiro Space and Astronautical Science Usui told that the soil on Phobos is a mixture of the soil of the Moon and Mars. Due to the storm running on Mars, the soil of the planet must have reached Phobos.

In fact, scientists believe that even though no form of life exists on Mars, there is a strong possibility that there may have been life here and evidence of signs of its micro-life is still available today. can be done.

Rover is trying to get confirmed evidence of life

Mars is not the only planet because it has two small moons named Phobos and Deimos. NASA’s Perseverance Rover is trying to get confirmed evidence of these. In this connection, Japanese researchers have said that ancient microorganisms may be preserved on Mars’ moon Phobos.

Researchers say that many asteroids have collided with this red planet throughout the history of Mars, after colliding with this planet, a huge piece was separated from it and its moons were formed from this separated material. In this way, these moons are ancient parts of Mars itself.

They suggest that since they close to Phobos Mars than Deimos. In this, more matter of Mars will accumulate during the collision. Researchers believe that if there was any form of micro-life on Mars at that time, then it would have reached Phobos with a collision.

Still, there are no conditions to live in Phobos. Researchers say that it is very inappropriate from the residential point of view.

Why there is possibility of life on mars?

There is absolutely no water and air here and it has to withstand high levels of radiation. From this it is clear that nothing alive is going to be found here, but there must be evidence of millions of years old. When that collision occurred, and then after reaching Phobos, their remains would have been safely frozen.

It may also contain fragments of DNA of microorganisms that had been freed from processes before leaving ancient Mars. This is very encouraging because with no atmosphere, these signs of life in Phobos would have been preserved like a natural time capsule.

To investigate this possibility, JAXA will send the Martian Moons Exploration (MMX) probe in the year 2024 for the exploration of the Phobos moon of Mars. This probe will land on the surface of Phobos and collect dust from a couple of samples of soil there either from the surface or going deep.

Why scientists are eagerly waiting for samples?

After this, this probe will bring samples to Earth by the year 2029. In such a situation, while returning, MMX will also orbit Mars’ second satellite Deimos. These samples brought from Phobos may contain signs that can tell that there was once life on Mars.

These can be either as biomarkers of molecules or as possible signs of life in the present. (Experts think that life is not possible on Mars right now). In both cases, this mission can learn a lot about Mars from Phobos.

The US and Chinese currently working on Mars. Japan is hoping to find clues to the origin of Mars and traces of possible life. The Japan Aerospace Exploration Agency or JAXA (JAXA) in 2024 from the Martian moon Phobos (Phobos) has released 10 grams ( 0.35 oz) of soil and return it to Earth in 2029, an Explorer spacecraft is planned to be sent.

A big problem on Mars is that there is no presence of humans, which makes it very challenging to explore there. This is the reason why our scientists are eagerly waiting for samples from Mars.