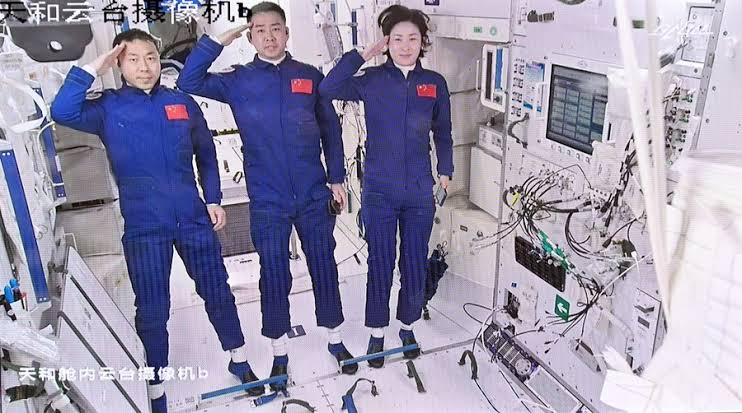 According to state broadcaster CCTV, the trio launched a Long March-2F rocket from the Jiuquan launch center in northwest China’s Gobi desert at 0244 GMT.

Related: All You need to know about China’s Tiangong Space Station in 2022

What Are The Responsibilities Of The Crew?

According to state-run CGTN, the team’s responsibilities include “completing in-orbit assembly and construction of the space station,” as well as “commissioning of equipment” and conducting scientific experiments.

After nearly “seven hours of flight,” the spacecraft docked at the Tiangong station, according to CCTV.

When Will The Tiangong Space Station Be Completed?

By the end of the year, Tiangong, which means “heavenly palace,” should be completely operating. China’s well-publicized space programme has already resulted in the landing of a rover on Mars and the sending of probes to the Moon.

The Crew Members Of Tiangong

Chen Dong, a 43-year-old air force pilot, will lead the Shenzhou-14 crew, whose major task will be to connect the station’s two lab modules to the main body.

Dong, together with fellow pilots Liu Yang and Cai Xuzhe, will join Tiangong’s second six-month crew, after the first return to Earth in April after 183 days on the space station.

The core module of Tiangong was sent into orbit earlier this year and is anticipated to survive at least a decade. The finished station will resemble the Soviet Mir space station, which orbited Earth from the 1980s to 2001.

What Are China’s Ambitions In space?

The world’s second-largest economy has put billions into its military-run space programme, with the goal of establishing a permanently crewed space station by 2022 and transporting humans to the Moon in the future.

The country has made significant progress in catching up to the US and Russia, whose astronauts and cosmonauts have decades of space exploration expertise.

Under Chinese President Xi Jinping, however, the country’s preparations for its widely publicized “space dream” have been accelerated.

Beijing is also intending to develop a base on the Moon, and the country’s National Space Administration has stated that a crewed lunar mission will be launched by 2029.

Is China Working With NASA?

Since 2011, when the US prevented NASA from working with China, China has been barred from participating in the International Space Station.