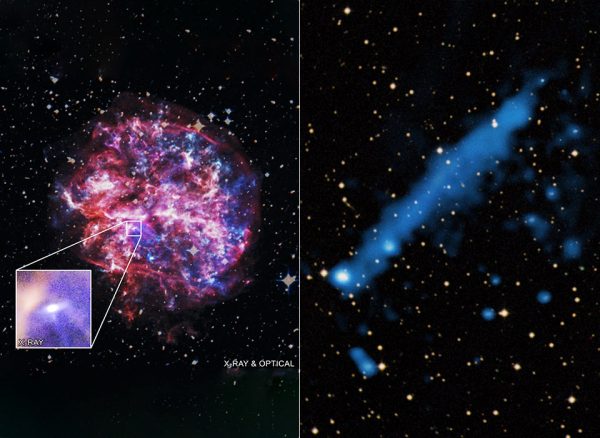 When a huge star dies, it doesn’t happen silently. Their deaths are extraordinarily magnificent events that light up the universe, a supernova explosion that sends stellar guts blasting out into space in a cloud of glory.

Meanwhile, the center of the once-bright star can survive as an ultra-dense neutron star or black hole.

If the explosion occurs in just the right way, the collapsing core will scream across the Milky Way like a bat out of hell, accelerating to such crazy speeds that it will eventually punch through the galaxy into intergalactic space.

What Is This Pulsar?

A form of pulsing neutron star known as a pulsar, tearing through its own entrails at a speed of roughly 612 kilometers per second, is one of these objects that has been freshly observed using data from the Chandra X-ray observatory (or 1.4 million Mph).

This pulsar is one of the fastest substance ever detected of its kind. (The fastest known star in the Milky Way is a star orbiting Sgr A*, the supermassive black hole at the galactic core, rather than a supernova remnant kicked by an explosion. It travels at a dizzying 24,000 kilometers per second at its fastest point in its orbit.)

“We had to measure the equivalent of a quarter’s breadth around 15 miles away to notice this motion because it was so far away.”

G292.0+1.8, a bright supernova remnant 20,000 light-years away, was used to make the discovery. A fast pulsar had been discovered there in previous investigations. Long and his colleagues sought to investigate the object to see if it could reveal the supernova’s history by tracking its path backwards to the object’s center.

“We only have a handful of supernova explosions with a reliable historical record,” said CfA astrophysicist Daniel Patnaude. “So we wanted to see if G292.0+1.8 could be added to that group.”

Related: Scientists Discovered The Brightest Pulsar Ever Observed Outside The Milky Way

Is This Star Moving?

They compared the differences in the pulsar’s position between photos obtained in 2006 and 2016 of the supernova remnant, as well as Gaia data on its present location in the Milky Way. These comparisons showed something fascinating: the dead star appeared to be traveling 30% quicker than prior calculations indicated.

What Other Observations Have Been Made?

The team was able to perform a fresh, in-depth research of how the dead star was Emitted from the supernova’s core because of the pulsar’s revised velocity. They devised two scenarios, each of which involved a similar mechanism.

Basically, a lopsided explosion can ‘kick’ a dead star’s collapsed core out into space at extremely high speeds; in this case, the star is currently traveling faster than the Milky Way’s mid-disk escape velocity of 550 kilometers per second, though it will take a long time to get there and may slow down over time.

Because it is traveling very slightly along our line of sight, its true speed could be considerably higher than 612 kilometers per second.

According to CfA astronomer Paul Plucinsky, “this pulsar is nearly 200 million times more energetic than Earth’s velocity around the Sun.” “It appears to have got its tremendous kick solely due to the asymmetry of the supernova explosion.”

The Astrophysical Journal has accepted the team’s findings, which were presented at the 240th meeting of the American Astronomical Society and are available on arXiv.